My goal here is to regrid geographical data onto another lat-lon grid. Any library or module needed will be unloaded after the process. I have tested PyFerret and the Python spherical harmonic module (hereafter PySpHarm) and presented here how to implement PyFerret for regridding purpose. In most cases, both PyFerret and the Python and PySpHarm do a pretty good job regridding geographical 2D data and preserve area averages. Here are examples going from higher resolutions to lower resolutions and vice versa.

For PyFerret, the major drawback is the fact that it is not quite trivial to install while for PySpHarm it is simple (see its documentation).

Gibbs fringes are inevitable for spectral harmonics tranforms although they can be minimised by applying filters (See Navarra 1994 and references therein). In contrast, PyFerret provides various regridding methods: linear interpolation, patch recovery by taking least squeares fit of the surrounding surface patches and conservative methods. These methods do not generate Gibbs ripples.

The computational complexity of the spherical harmonics transform is O(N^3) for cut-off frequency N. Some algorithms allow for a running time of O(N^2logN). I am not sure what the actual algorithm is used by PySpHarm but in my experience it is far slower than PyFerret in most cases. The performance difference is more obvious when only a region of the globe needs regridding.

You may download the script here. Below I present slightly more details for thoughts.

Using PyFerret still requires some knowledge of Ferret commands. Basically my python function here is to stitch the Ferret commands together for regridding.

In Ferret, to regrid a variable SOURCE to the lat-lon grid of DEST you would write: LET RESULT = SOURCE\[GXY=DEST\]

This is included in the function regrid_once_primitive.

What have been taken care of here:

What have not been taken care of:

PyFerret.getdata and PyFerret.putdata get/read python dictionary objects. I wrote my own wrappers, __Num2Fer__ and __Fer2Num__ for converting between my input and what PyFerret asks for. For regridding purposes, you don’t need the much information needed by PyFerret, I can fill in dummy values for fields such as “title”,”dimension names”,”data_units”.

Consequently the regridding function only requests a data array, a list of coordinates, and a list of dimensions units for the input data, and the latter two for the output grid.

I also included a function __assignCAxis__ that guesses the dimension type (T/X/Y/Z) from the dimension units. This function has been very useful even in other situations. I use it a lot. 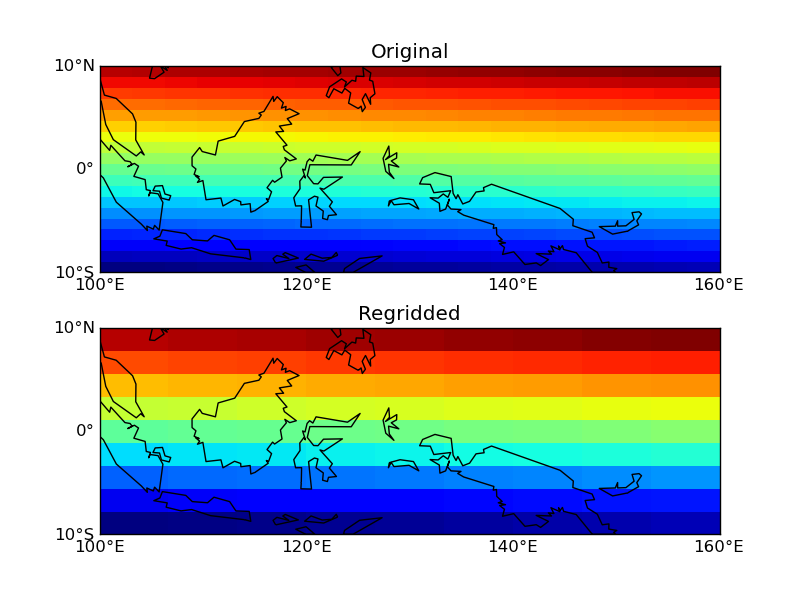